by Jodie Renner, editor and author

How do you express thoughts and inner reactions in fiction? Thoughts, like dialogue, need to drive the story forward and be natural-sounding and appropriate for both the “thinker” and the situation.

For this article, I’ve purposely used the term “thought-reactions,” instead of just “thoughts,” as in fiction, in any given scene, we’re in someone’s point of view, so in their head, privy to their thoughts. In that sense, all the narration for that scene is or should be in their thoughts, written in ordinary font, with no special punctuation or thought tags. For example, in Sandra Brown’s Ricochet, we’re in Duncan’s point of view. We read: “Within seconds Jenny appeared. All six feet of her, most of it sleek, tanned legs that looked like they’d been airbrushed to perfection.” This is obviously Duncan’s viewpoint and his opinion/thoughts. No need to say “he thought.”

Thought-reactions, on the other hand, are when that viewpoint character (and only the POV character – we shouldn’t know the thoughts of anyone else in that scene) has an inner, emotional reaction to something that has just happened, or something someone has just said or done, whether it be anger, delight, confusion, frustration, surprise, or whatever. Or perhaps they’re actively planning something.


Indirect introspection or indirect thoughts summarize or paraphrase the thinker's words. Indirect thoughts are usually expressed in third-person, past tense and written in normal font (avoid italics for indirect thoughts), with or without thought tags, like “she thought” or “he thought.” This is the equivalent to reporting what somebody said, rather than using their exact words in quotation marks, only of course these words are not spoken.
-          She wondered if he’d be late again.

Direct introspection or direct thoughts use the character’s exact (unspoken) words, normally expressed in first-person, present tense. They can be in normal font or in italics. This is the equivalent to dialogue in quotation marks, except the words aren’t spoken out loud.
-          Why doesn’t she get it?
-          I’d better call Mom today.
-          Where’s that phone number?
Putting direct thoughts in italics can be very effective for expressing a sudden strong emotional reaction. Showing these visceral reactions of your characters helps us get inside their heads and hearts more deeply and bond with them more. Showing a thought-reaction in italics works best when used sparingly, for a significant or urgent thought or reaction:
Rats!
Omigod!
Leave out the thought tag, as the italics signify a direct thought, in this case.

Here are some examples of indirect thoughts contrasted with the same thought expressed directly.
Indirect: She felt lucky. 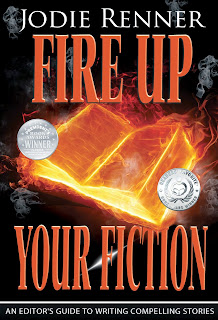 
Indirect: He was such an idiot.
Direct: What an idiot! Or, in second person: You idiot!


Indirect: Did she really think he’d believe that?
Direct: Give me a break!


Here’s an example from Don’t Look Twice, by Andrew Gross:


It was already after ten! She tried David’s cell one more time. Again, his voice mail came on.
What the hell is going on, David?
She started to get worried….


-          Never say “he thought to himself” or “she thought to herself.” That’s a sign of amateurish writing—who else would they be thinking to?

-          Don’t have your characters think in perfect, grammatically correct, complex sentences. It’s just not realistic. Many of our thoughts are emotional reactions, flashes or images, expressed through a few well-chosen words.

Jodie Renner is a freelance fiction editor and the award-winning author of three craft-of-writing guides in her series An Editor’s Guide to Writing Compelling Fiction: FIRE UP YOUR FICTION,  CAPTIVATE YOUR READERS, and WRITING A KILLER THRILLER, as well as two clickable time-saving e-resources, QUICK CLICKS: Spelling List and QUICK CLICKS: Word Usage. She has also organized two anthologies for charity: VOICES FROM THE VALLEYS – Stories and Poems about Life in BC’s Interior, and CHILDHOOD REGAINED – Stories of Hope for Asian Child Workers. Jodie lives in Kelowna, BC, Canada. Website: www.JodieRenner.com;  Facebook. Amazon Author Page.