Time for Looking Back and Looking Ahead! 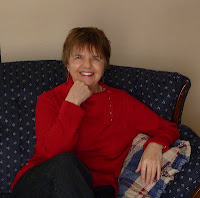 Happy New Year, everyone! May 2014 exceed your expectations in every way!

First, thank you.
I just want to say, first of all, that I'm so grateful to all the readers of my posts on various blogs and my two fiction-writing guides. And a special thanks to those of you who were kind enough to take the time to write a review of one or both of my books on Amazon! Thanks so much, all of you, for enriching 2013 for me, and I hope my books and blog posts have provided you with lots of helpful tips to make your fiction stronger!

And thank you to the writers I've worked with this year to make your novels and short stories more intriguing. I've enjoyed our interactions and reading your exciting stories!

It's the time for looking back on the past year and looking forward to the next one. How did 2013 go for you? What are you planning and hoping for in 2014?

Considering it has the number 13 in it, the year 2013 wasn't at all unlucky for me. I had a great year, in fact. And I've got some major lifestyle changes coming up in 2014! It promises to be a big year for me! Scroll down for those.

Travel and presentations:
I managed to continue travelling to various places in North America in 2013, starting with a trip to Cuba in January, then Puerto Vallarta, Mexico, in February, Colorado in March, Boston in May, NYC in July, Nashville in August, then visiting with my family in various parts of BC, Canada, in September. All stimulating and fun!

I participated in two panels at Left Coast Crime's conference in Colorado Springs in March and enjoyed getting together there with my blog pals at Crime Fiction Collective. In May I attended Grub Street's 2013 conference in Boston, The Muse and the Marketplace. In July, I was off to Craftfest and Thrillerfest in New York City for the fourth time, where I participated in a panel on revision and self-editing and sold a lot of books, especially Writing a Killer Thriller. Then I was on a similar panel in August at Killer Nashville in Nashville, TN, and I also presented a 90-min. workshop on point of view at Killer Nashville - and sold lots of books. Then, during a trip to BC in Canada, I presented to a writers' group and an editors' group. As well, I gave two talks, one on first pages and one on self-publishing, to my local writers' group, the London Writers Society.

Both books out in print, too:

And between traveling, presenting, and editing, I managed to revise and expand both of the books in my Editor's Guide to Writing Compelling Fiction series and publish them both in trade paperback format. Style That Sizzles & Pacing for Power came out in print in March, then I published a significantly updated and expanded version of my Writing a Killer Thriller also in paperback in early July, just in time to sell at Thrillerfest in NYC. I love having these books in both e-book and print, and sales indicate that readers do, too!

Book Award:
And one of my books, Style That Sizzles & Pacing for Power, won an award! It received a Silver Medal in the Florida Authors & Publishers President's Book Awards, in the reference category. 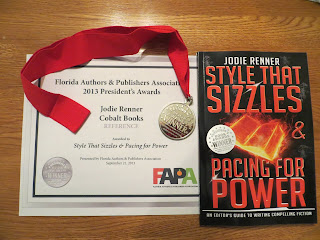 Magazine Articles:
I was interviewed in Southern Writers Magazine in the Sept./Oct. 2013 issue, and had two of my articles on tips for adding suspense, tension and intrigue published in Suspense Magazine.

Judge for Writer's Digest Self-Published Book Awards:
I evaluated books again for this contest. I received 25 books to review and was only allowed to choose one to go on to the next level. I submitted written evaluations for all of them, to go on to the authors.

Writing:
I've got about three-quarters of my next book in the editor's guide series, Immerse the Readers in Your Story World. I plan to publish it by April.

Blogging:
I've been busy blogging all year, too. After guest-blogging on the award-winning blog, The Kill Zone, for a year, I was welcomed on Oct. 7 as an official member and biweekly contributor (every 2nd Monday). I've continued to blog on Crime Fiction Collective on the alternate Mondays, and I also guest-blog occasionally on other great blogs for writers, like D.P. Lyle's Writer's Forensics Blog, Elizabeth Craig's blog, Mystery Writing is Murder, Angela Ackerman & Becca Puglisi's blogs, and others. And of course I still post here whenever I can!

Links to some of my recent blog posts:

Crime Fiction Collective: 10 Tips for Attracting a Top-Notch Editor for Your Story


The Kill Zone: 10 Ways to Add Depth to Your Scenes

The Kill Zone: Don’t Stop the Story to Introduce Each Character

The Kill Zone: Immerse Your Readers with Sensory Details

The Bookshelf Muse: Let the Characters Tell the Story


Mystery Writing is Murder: Concrete Tips for Developing an Appealing Voice in Your Fiction

Editing & Critiquing:
And of course I've been hard at work editing fiction manuscripts and also doing critiques of the first 10-50 pages of novels. I specialize in editing thrillers and other fast-paced fiction and I love my freelance editing, especially since I get to pick and choose the manuscripts I work on! I've had the privilege of working with some very talented writers in the last few years, so I find my work really satisfying and rewarding. And I love the interactions and friendships I've made with the authors whose stories I helped polish up to get ready to successfully publish or submit to agents.

The big move:
My biggest news is that I'm planning to move across the country in May or June, and am busy decluttering and downsizing a 3-bedroom house with a full (and filled!) basement in preparation for the long-distance
move and setting up an apartment in Kelowna, BC, Canada. So of course every spare moment on the weekends is spent sorting through stuff and deciding what to give away, what to sell, what to toss, and what to take with me. I'm excited because I'll be near family and old friends again, and the area, the Okanagan valley, is gorgeous, with large lakes, low mountains, fruit orchards and vineyards everywhere!

Next book out!
I'm excited about my third book in the editor's guide series, Immerse the Readers in Your Story World, which will be out in print in the next few months!

And more editing.
And I'm looking forward to finishing fiction manuscripts I'm editing and collaborating with some new writers in 2014!

HAPPY NEW YEAR!
Here's hoping 2014 will be your most creative, productive, and satisfying year ever!
How was 2013 for you? What are your plans for 2014? Please share in the comments below.

Jodie Renner, a freelance fiction editor specializing in thrillers and other fast-paced fiction, has published two books to date in her series, An Editor’s Guide to Writing Compelling Fiction: WRITING A KILLER THRILLER and STYLE THAT SIZZLES & PACING FOR POWER (Silver Medalist in the FAPA Book Awards, 2013). Both titles are available in e-book and paperback. For more info, please visit Jodie’s author website or editor website, or find her on Facebook, Twitter, and Google+. Jodie also blogs alternate Mondays on The Kill Zone blog and Crime Fiction Collective blog.


To subscribe to Jodie’s “Resources for Writers” newsletter (published about 4-10 times a year), please click on this link: http://eepurl.com/C9dKD

Posted by Jodie Renner at 11:36 AM No comments: