HAPPY NEW YEAR, writers! May all your hopes and aspirations reach fruition in 2016!

As I have in the past, I hope to continue in the upcoming year to help writers sharpen their skills and reach their publication goals through my editor's guides to writing compelling fiction, as well as my clickable e-resource guides, blog posts, and workshops -- and of course my editing of novels and short stories.

If you're looking to hone your craft at writing and also network with other writers, editors, agents, and publishers, my New Year's gift to you is a very comprehensive list of Writers' Conferences and Book Festivals in North America in 2016, just below this blog post. Or click here to view the list, organized by month, with links to their websites.

And here's a list, with active links, of my most popular tips for writing compelling fiction: Links to Jodie Renner's Top Craft of Writing Posts.

2015 was a very productive year for me -- in fact, a little too busy, for someone who is supposed to be retired and slowing down!

On February 28, I published my third writing guide, CAPTIVATE YOUR READERS - An Editor's Guide to Writing Compelling Fiction. This book is all about engaging readers emotionally and keeping them eagerly turning the pages of your fiction using techniques such as deep point of view, avoiding author intrusions, and showing instead of telling. It has already won two book awards plus an Honorable Mention. You can check it out on Amazon HERE.

And here's my Amazon Author Page, in case you're interested in my two other writing guides; two handy, clickable resources for writers, editors, and students; and the regional anthology I organized and edited and published on Nov. 24, 2015.

In April 2015 (for the second time in a year!), I moved to a new town closer to my family, which I love. Think I'll put down roots here in beautiful Penticton, BC, situated between two lakes, with mountains on the other two sides - and mild winters, for Canada! I'm a member of the local writers' group, Penticton Writers and Publishers, and am on the organizing committee for a writers' conference here in April, the Okanagan Valley Writers' Festival, April 8-10, 2016.


I've continued to edit novels for my clients around the world (but mainly in the U.S.), which I find very rewarding, both because of the opportunity to work with talented authors to polish their exciting stories, and for the warm, long-lasting relationships that are created as a result of long-term collaborations.

I also presented writing workshops at several conferences in 2015, including, in January, at bestselling author Steven James' Troubleshooting Your Novel workshops in Nashville, at Word on the Lake Writers' Festival in Salmon Arm, BC, in May, and at When Words Collide in Calgary, Alberta, in August. And I've been busy judging short stories for various contests and anthologies, including again this year for Writer's Digest's Popular Fiction Awards.

After being an active blogger, publishing my tips on writing compelling fiction first on Crime Fiction Collective for three years, then for two and a half years every second Monday on the award-winning The Kill Zone blog (both blogs mainly aimed at writers and readers of mysteries and thrillers), I decided to step down from regular blogging to focus my energies more locally, with occasional posts here on my own blog.

In 2015, I again served as a fiction judge for short stories for Writer's Digest's Popular Fiction Awards. My category was thrillers, and I received about 245 short stories, which I had to narrow down to my top 10 choices, in order. That was a huge job, but I'm confident that the final 10 I chose were the most exciting and well-written stories in that category.

This year I've also been busy organizing and editing two anthologies for charity, with more to come in the future. 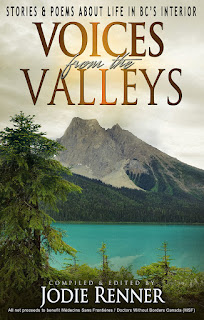 Because I was so delighted to be back in beautiful British Columbia, on Canada's West Coast after an extended absence, I decided to organize a high-quality anthology of stories and poems that typify and celebrate life in BC. This ended up to be a huge undertaking, reaching out to writers around the province and reading, then choosing, and editing their submissions. Many of the stories went back and forth several times during the editing process. Then I had to decide how the contributions would be organized and format the book. It was a wonderful opportunity to meet talented writers in BC and collaborate with them to produce a polished product that would also benefit a very worthy charity, Doctors Without Borders.

On November 24, we proudly released VOICES FROM THE VALLEYS - Stories & Poems about Life in BC's Interior.  Within 3 weeks, we were sold out of the first printing of 400 copies! We're on the second printing now, and I've already sent our first monetary donation to Doctors Without Borders.

At 107,000 words long and 308 pages, this high-quality anthology includes fiction, true stories, and poetry by 51 contributors, organized by region of the interior of BC, as well as drawings and both colour and black-and-white photos of BC.

The e-book version is without the images but contains a few extra stories and poems that I couldn't fit into the print version.

For more on this fabulous celebration of life in British Columbia, Canada, plus a link to a PDF of excerpts from the book, click HERE.

I'm also in the process of organizing and editing CHILDHOOD REGAINED - Stories of Hope for Asian Child Workers. This collection of short stories, aimed at readers age 12 and up, is about children working in difficult conditions in South Asia - India, Nepal, Pakistan, and Bangladesh. It's meant to raise awareness of the conditions these children are living under and to raise money to help eradicate child labor in Asia. It will be released in spring 2016, and we're still trying to find the best charity for it. The proceeds will definitely go to a charity aimed at helping third-world children. likely Save the Children.

For 2016, I'm thrilled to have been invited to present again at Word on the Lake Writers Festival in May in Salmon Arm, BC, where I will join esteemed Canadian writers such as Arthur Slade, Alan Twigg of BC BookWorld, Robert J Sawyer, and Richard Wagamese.

I'll also be presenting two workshops at the Okanagan Valley Writers Festival, April 8-10, and will be judging short stories for the Federation of BC Writers' contest, Literary Writes 2016. I also plan to continue editing novels and producing anthologies in 2016 and beyond.


Jodie Renner is a freelance fiction editor and the award-winning author of three craft-of-writing guides in her series An Editor’s Guide to Writing Compelling Fiction: Captivate Your Readers, Fire up Your Fiction, and Writing a Killer Thriller. She has also published two clickable time-saving e-resources to date: Quick Clicks: Spelling List and Quick Clicks: Word Usage. Jodie recently organized and edited a BC-wide anthology of stories and poetry for Doctors Without Borders, called Voices from the Valleys, and is working on a second anthology, Childhood Regained, to help reduce child labor in Asia. You can find Jodie at www.JodieRenner.com, www.JodieRennerEditing.com, and on Facebook, Twitter, and Google+. Click HERE to sign up for Jodie’s occasional newsletter.
Posted by Jodie Renner at 11:40 AM 2 comments: