In another article, Amp up That Dialogue!, I discuss various techniques for writing dialogue that will come alive on the page. Drop over there for some advice on making your dialogue less stilted and more natural-sounding. Also, check out another post of mine, Some Dialogue Don’ts.

This article just provides a reference for the grammatically correct way to write dialogue, as well as some style tips for dialogue tags. Using correct punctuation and form for dialogue will keep your readers from becoming distracted, confused or annoyed, and maintain their focus on your story. So if you want your manuscript to look professional and your story to read smoothly, it’s best to follow these technical guidelines.

2. In North America, the punctuation always goes inside the end quote, not outside it:

“What’s wrong with you?” he asked.
“Nothing,” she replied.

3. If the person is asking a question, the question mark goes inside the quotation mark, and a period goes at the end of the whole sentence. The same goes for exclamations.

“Where were you?” she asked.
“Help!” she screamed.

Note that in the above examples, even though your word processor wants you to put a capital letter for “she” or “he”, these need to be lowercase, as they don’t start a new sentence.

4. If the person speaking is making a statement (or a suggestion or a command), replace the period (which would follow if it weren’t in quotation marks) with a comma. Then put your period at the end of the sentence.

5. If there’s no attribute (he said, she said), put a period inside the closing quotation mark.

6. If you start with the dialogue tag, put a comma after it, before your opening quotation mark and the dialogue:

7. If you want to put your dialogue tag in the middle of a sentence, put a comma inside the first set of closing quotation marks, and also after the dialogue tag:
“I can never understand,” she said, “what you see in him.” (Note no capital for the second part.)

1. Avoid overusing dialogue tags. Instead of constantly using he said or she said (or the name and said), replace them often with action beats, which will also help bring the scene alive:
He closed the door very quietly. Too late.
She stood there, hands on hips. “Where’ve you been?”
“Don’t start.” He took off his coat and hung it up.
The action immediately before or after the words tells us who’s talking.
Or, if it can be done without confusing the readers, just leave out the dialogue tag or action beat. Context often makes it obvious who’s speaking.
Note that when you use an action tag instead of he/she said, you use a period at the end of the dialogue, not a comma like you would before “he said".

2. The best dialogue tags are the simple he said and she said (or asked), or with the name: John said, Carol said. These simple dialogue tags don’t draw attention to themselves or interrupt the story line, as they’re almost invisible. Avoid fancy or redundant tags like queried, chortled, alleged, proclaimed, conjectured, affirmed, explained, apologized, etc., which can be distracting.
Don't say “I'm sorry,” she apologized. or “This way,” he explained. Those “explanations” are redundant “telling” and mildly insulting to the reader, who can tell by what they're saying. Just use “said”. Or often, no speech tag is needed.
But I do suggest using verbs that accurately and quickly describe how the words are delivered, like whispered, shouted, yelled, screamed, or stammered.

3. You can’t use words like laughed or grinned or smiled or grimaced or scowled as dialogue tags.
These are both incorrect:
“You look great,” he grinned.
“Why, thank you,” she smiled.

Instead, make sure the words they’re saying and any actions convey the feelings you wish to express.

5. Slightly off-topic: Do not put quotation marks around thoughts. That’s a topic for another post.

1. Contemporary North American fiction seems to avoid the reversed form, “said Carol,” in favor of “Carol said.” The reversed form seems to be more British and also considered kind of archaic, which makes it great for historical fiction.

2. Most contemporary North American fiction writers, with the notable exception of Lee Child, seem to put most dialogue tags after the words spoken:

Rather than before:
Tony said, “Let’s go.”
However, if what they're saying is lengthy, readers want to know immediately who's talking, so I would put the “Jordan said,” before the paragraph of dialogue.

These last two points are of course just my observations of common usage, not rules. But aspiring or debut authors would do well to stick with what seems to be in favor, to give a contemporary feel to your novel. Of course, if you’re writing historical fiction, go for the older “said Elizabeth” form.


Jodie Renner is a freelance fiction editor and the award-winning author of three craft-of-writing guides in her series An Editor’s Guide to Writing Compelling Fiction: Captivate Your Readers, Fire up Your Fiction, and Writing a Killer Thriller. She has also published two clickable time-saving e-resources to date: Quick Clicks: Spelling List and Quick Clicks: Word Usage. You can find Jodie at www.JodieRenner.com, and on Facebook and Twitter.
Posted by Jodie Renner at 6:41 PM No comments:

30 Excellent Points to Consider as You Revise / Rewrite Your Novel

I just discovered an excellent checklist for revising / rewriting your fiction. I highly recommend you go through these points to see if any of them resonate with you in regards to your current WIP.

I tried to copy just the beginning of the list to give you a taste of it, but it would only let me copy the whole thing. It's on an excellent blog called "Writers Write." Here's the link:  http://writerswrite.co.za/rewriting-a-checklist-for-authors-1 Follow them by clicking on the links at the end.

Rewriting – A Checklist for Authors


30 questions to ask when you're revising / rewriting your novel 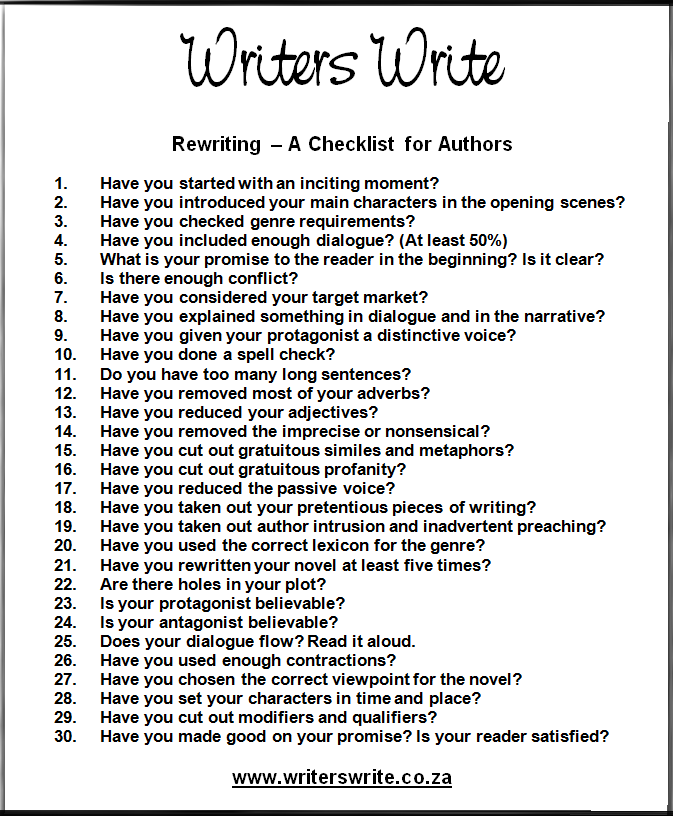 Taken from Writers Write -How to write a book. Join our Writers Write course from 13-16 January 2014 (more dates available on request). Email news@writerswrite.co.za for details.
Join us on Facebook and Twitter for daily writing tips

AND SCROLL DOWN FOR A LIST OF WRITERS' CONFERENCES & BOOK FESTIVALS IN 2014.
Posted by Jodie Renner at 7:17 PM No comments: