Since so many families are now forced to stay home, and a lot of parents are faced with homeschooling their kids, I'm offering a special on Childhood Regained - Stories of Hope for Asian Child Workers, school editions. This cross-curriculum resource is excellent for developing skills in reading, writing, mapping, graphing, research, social studies, and social awareness, and includes fun, creative activities as well. 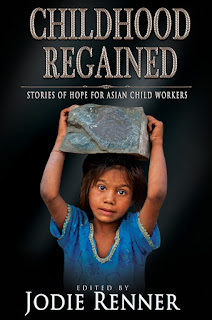 Receive a PDF of the CHILDHOOD REGAINED - Stories of Hope for Asian Child Workers, Canadian Schools Grs. 4-6 edition (11 stories + questions and activities) for $4

and the accompanying teacher's/parent's guide for each (answers to questions and lots more info and activities) on PDF for only $3.

Or a FREE PDF of any one story plus study questions.

Perfect for home printing of selected stories or reading on-screen.

Or purchase the print or electronic version of any of the school editions listed below, with links, and receive the teacher's/homeschooler's guide for FREE.

Childhood Regained – CANADIAN SCHOOLS EDITION. Trade paperback (6x9), 268 pages. ISBN: 978-0993700477. $17.95 Can. Includes all 19 stories and a poem. Best choice for use with a wide range of grades or for your school library. Add some of the thin teachers' guides (one free with each order of 10 books). Order quantities from Cobalt Books or CreateSpace Direct.  Print book on Amazon.ca   E-book on Amazon.ca


BRIEF DESCRIPTIONS OF THE STORIES