Engage Your Readers with Deep Point of View 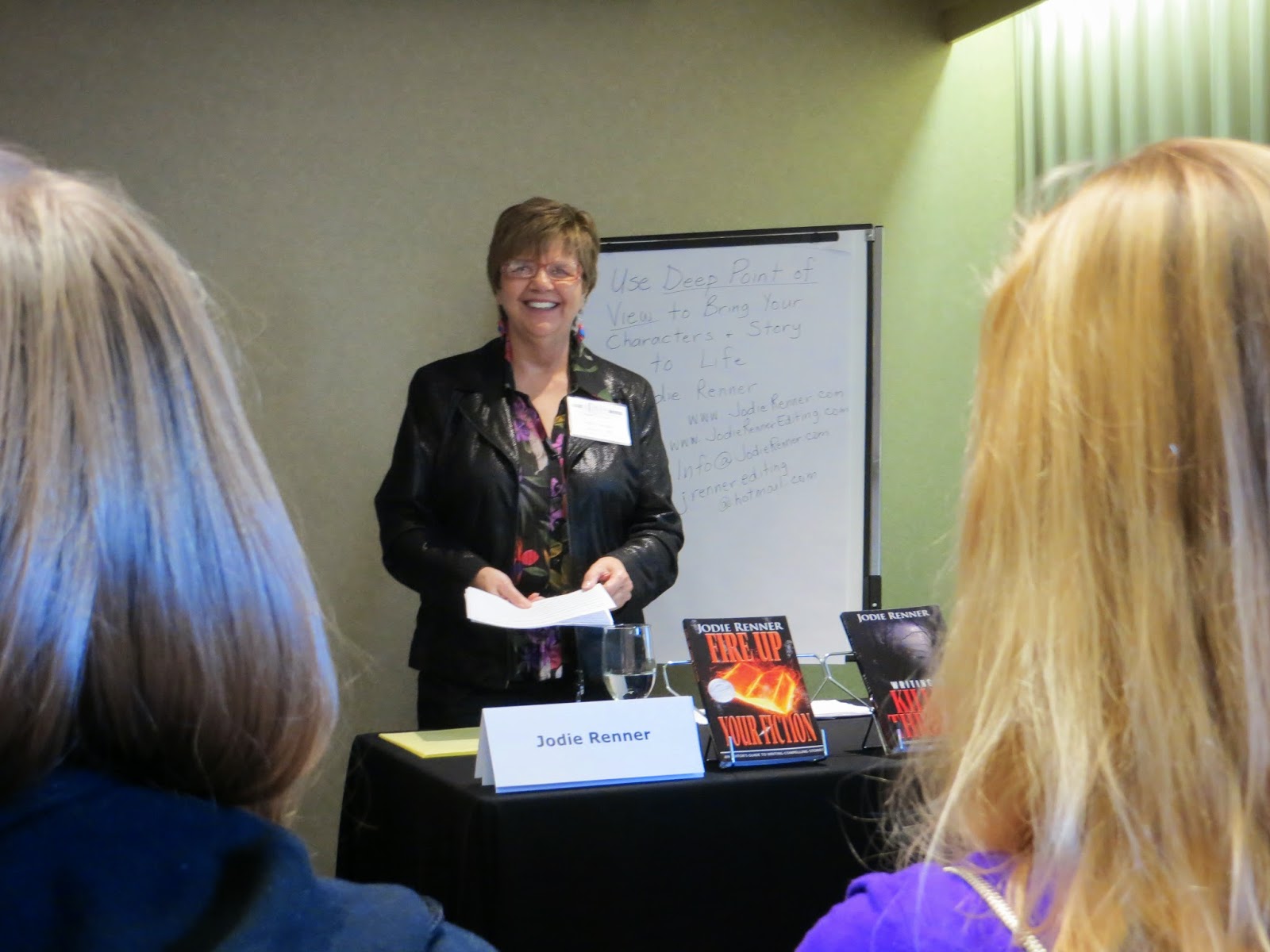 This is the HANDOUT from Jodie's recent workshop on deep point of view at When Words Collide literary festival, Calgary, Aug. 8-10, 2014.

(POV = point of view = viewpoint – Who’s telling the story? or Whose head are we in for that scene?)

Some quick tips for avoiding POV gaffes in your fiction:

(The actual presentation of course had/has an introduction to point of view and deep POV or close third-person viewpoint, with lots of details and examples.)

~ First, decide whose scene it is. Who has the most at stake? (If in doubt, show it from the POV of your protagonist.)

~ Now, get into that character’s head and body and stay there for the whole scene or chapter. Don’t flit around to the thoughts of other characters or show anything that’s going on outside of your POV character’s range or perceptions.

~ Don’t show or describe things going on behind the character’s back, in another room, or anywhere out of their sight or hearing range. Only show us what the character can logically perceive at that time.

~ To describe the setting, use the perceptions, words, goal, attitude, and mood of the POV character for that scene. Don’t describe a scene as a neutral observer or as the author talking to the readers.

~ Color your descriptions of other characters with the attitudes of your POV character toward them. Avoid neutral descriptions.

~ Don’t get into the inner thoughts or feelings of any other characters in that scene. Show their thoughts, emotions, attitudes and intentions by their facial expressions, body language, tone of voice, words, and actions – anything the POV character can perceive.

~ When starting a new scene or chapter, use the name of the viewpoint character right away, in the first sentence, to establish immediately for the reader whose head we’re in now.

~ After introducing the POV character, refer to him or her in an informal way, as they would think of themselves.

~ Use the POV character’s name at the beginning of scenes (full name for first mention), then use mainly “he” or “she” except when their name is needed for clarity. (The “he” or “she” is like “I”.)

~ Refer to other characters by the name the POV character normally uses for them.

~ Avoid lengthy "info dumps." Don’t butt in as the author to explain things to the readers, outside of the character’s viewpoint. Instead, reveal the info from the character’s POV or as a question-and-answer dialogue, with some attitude and tension to spice things up.

~ Don’t show the POV character’s facial expression or body language (unless they’re looking in a mirror). They don’t know what’s going on with their face. Or indicate it somehow through their thoughts or fears. For example, you could say “She felt her face flush” to indicate that she’s blushing.

~ Sprinkle in direct thought-reactions in italics, to reveal the character’s true feelings and increase intimacy with the readers.

~ Show the POV character’s sensory reactions to their environment, other characters, and what’s happening. Use as many of the five senses as is appropriate to get us into the skin of the character.

~ Avoid lengthy backstory dumps, the author telling the readers about the character and their background. Introduce only the essential info, through the characters. Or use brief flashbacks, in scenes in real time, with action and dialogue.

~ Don’t have characters magically knowing the names of other characters they’ve never met or heard of, just because we, as the readers, have met those other characters. This is an easy gaffe to make inadvertently.

to life, see Jodie’s writers’ guides in the series, An Editor’s Guide to Writing Compelling Fiction, including her latest, CAPTIVATE YOUR READERS.

Jodie Renner is a freelance fiction editor and the award-winning author of three craft-of-writing guides in her series An Editor’s Guide to Writing Compelling Fiction: Captivate Your Readers, Fire up Your Fiction, and Writing a Killer Thriller, as well as two clickable time-saving e-resources, Quick Clicks: Spelling List and Quick Clicks: Word Usage. She has also organized two anthologies for charity, incl. Childhood Regained – Stories of Hope for Asian Child Workers. You can find Jodie at www.JodieRenner.com, www.JodieRennerEditing.com, her blog, http://jodierennerediting.blogspot.com/, and on Facebook and Twitter.